Clorox has joined the growing list of brands to have pulled its advertisements from Facebook in a protest over the social media giant’s perceived failure to stop the spread of hate speech on its platform.

The cleaning goods giant announced that it will be suspending all advertisements on the social media site through the end of the year, following suit with the likes of Ford, Denny’s, Adidas, Pepsi and Best Buy which all announced similar boycotts earlier this week.

‘As a people-centered company committed to our values, we feel compelled to take action against hate speech, which we believe will increase through the balance of the year,’ Clorox said in a Monday statement. ‘This creates an increasingly unhealthy environment for people and our purpose-driven brands.’

The Clorox Company, which also includes brands Hidden Valley Ranch and Brita, added that it would ‘maintain our planned level of advertising spending but shift to other media.’ 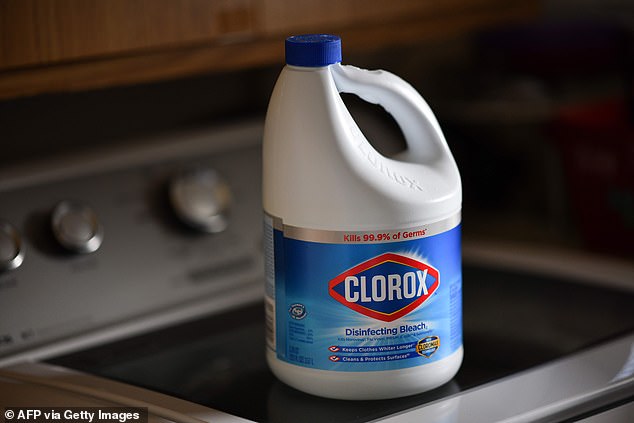 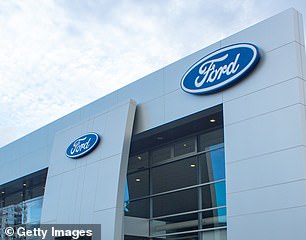 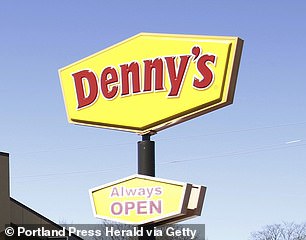 Ford then on Monday also put the brakes on all national social-media advertising for 30 days, as it re-evaluates spending on sites. Restaurant chain Denny’s said it is pausing paid advertising on Facebook starting Wednesday.

More than 160 companies have all ceased advertising their products on Facebook in recent week as part of the Stop Hate for Profit campaign.

The boycott was organized by several civil rights groups, including the Anti-Defamation League, the NAACP and Sleeping Giants, who argue that Facebook and other social media platforms have not done enough to address racism and hate speech on their platforms.

Facebook makes an estimated $70 billion annually from ads, the coalition claimed in a statement on the ADL website.

Coca-Cola pulled its advertisements from Facebook the same day, saying it wasn’t officially joining the boycott, but that it had paused on paid advertising across all social media platforms globally for at least 30 days.

‘We will take this time to reassess our advertising policies to determine whether revisions are needed. We also expect greater accountability and transparency from our social media partners,’ said James Quincey, Coca-Cola chairman and CEO.

Friday’s massive drop in valuation cut deep into Facebook CEO Mark Zuckerberg’s personal fortune, pushing him down from third to fourth place on Bloomberg Billionaires Index and leaving him with a new net worth of $82.3 billion.

A similar announcement was made by Unilever later Friday, which was then followed by Starbucks, who said it working with civil rights groups to ‘stop the spread of hate speech’ and would be ending all social media ads, but wasn’t officially joining the boycott at this time. 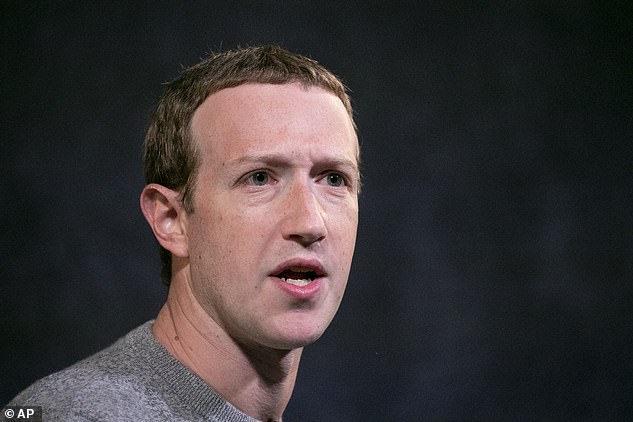 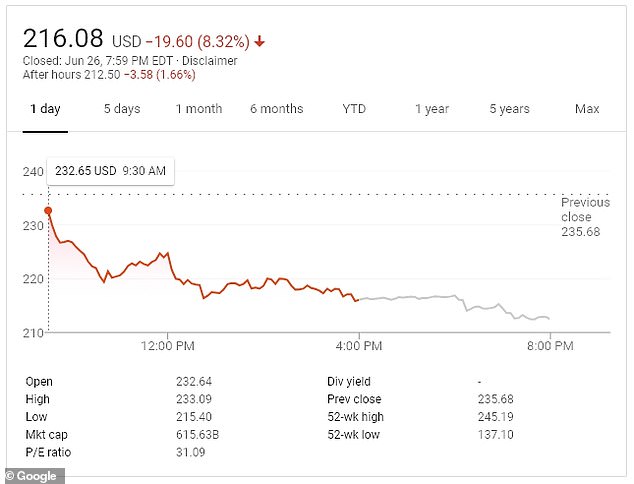 Ford then on Monday also put the brakes on all national social-media advertising for 30 days, as it re-evaluates spending on sites. Restaurant chain Denny’s said it is pausing paid advertising on Facebook starting Wednesday.

In response to the boycott, a Facebook spokeswoman said the company invests billions each year to ensure safety and continuously works with outside experts to review and update its policies.

The company has banned 250 white supremacist organizations from Facebook and Instagram, she said, adding that the company’s substantial investment artificial intelligence technology allows Facebook to find nearly 90 percent of hate speech before users report it.

‘We know we have more work to do, and we’ll continue to work with civil rights groups, GARM, and other experts to develop even more tools, technology and policies to continue this fight,’ the spokesperson added.

Zuckerberg also responded to the boycott in a Facebook Live video Friday where he announced the company would begin labeling ‘harmful’ content from politicians that remains ‘newsworthy’.

Though he did not name Trump, the policy comes in response to a campaign demanding Facebook impose tighter restrictions on ‘misinformation’ in the president’s campaign ads, and on his inflammatory posts. 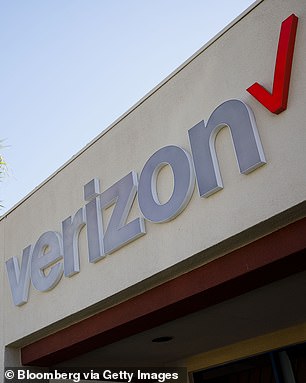 The ‘Stop Hate for Profit’ campaign will now work on getting European companies to join the boycott and urge regulators to take a hard stand on Facebook. More than 160 companies, including Unilever (left) and Verizon (right), have said they will not by advertising 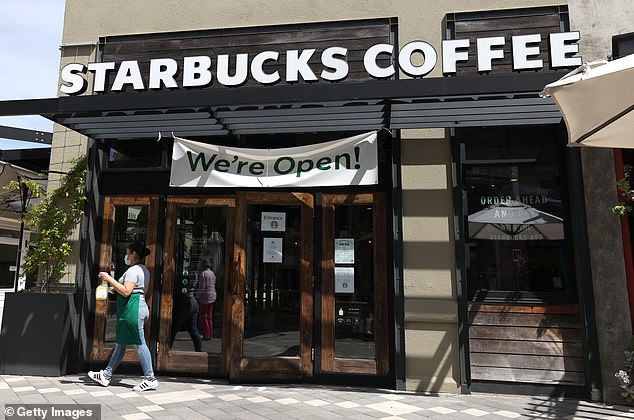 Starbucks, not officially a participant in the boycott, says it will still suspend advertising on all social media while working with civil rights groups to ‘stop the spread of hate speech’ 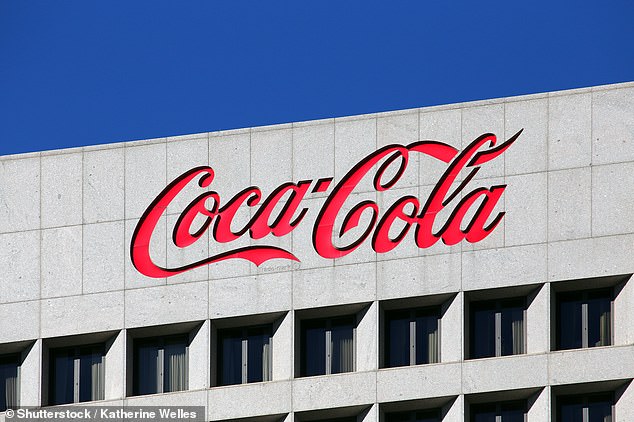 Coca-cola and Unilever announced a similar pause on Friday, when Facebook saw its shares drop $56 billion in valuation in response to the negative publicity

Twitter has already placed warning labels on some of the president’s tweets that it deemed abusive or threatening, and unlike Facebook, Twitter banned all political campaign ads.

Zuckerberg slammed the move when Twitter first labeled a Trump tweet, saying it wasn’t up to social media companies to be the ‘arbiters of truth’.

Hundreds of Facebook employees even staged a virtual walkout earlier this month after company executives declined to add a warning label to President Trump’s post that looting would lead to shooting during nationwide protests against racial inequality.

And the Facebook CEO has since appeared to have had a change of heart following the punishing advertiser boycott.

‘We will soon start labeling some of the content we leave up because it is deemed newsworthy, so people can know when this is the case,’ Zuckerberg said in the livestream.

‘We’ll allow people to share this content to condemn it, just like we do with other problematic content, because this is an important part of how we discuss what’s acceptable in our society – but we’ll add a prompt to tell people that the content they’re sharing may violate our policies,’ he continued.

In the meantime, Clorox said it will ‘continue to monitor the situation and revisit our position as needed’.

‘We will evolve our standards and guidelines for progress for all platforms and publishers to reflect our rising expectations for greater responsibility as these channels continue to become a more important part of people’s lives,’ company continued.

The Stop Hate for Profit campaign was launched by civil rights groups after the death of George Floyd in police custody triggered widespread protests against racial discrimination in the US.

In addition to Starbucks, Verizon, Unilever and Ben & Jerry’s, the following companies will pause advertising on social media platforms:

The beverage maker will pause paid advertising on all social media platforms globally for at least 30 days, Chief Executive Officer James Quincey said in a statement.

‘We and Dockers are joining the #StopHateForProfit campaign and pausing all ads on Facebook and Instagram,’ the apparel company said.

The outdoor brand, a unit of VF Corp, said it would pull out of all Facebook-owned platforms.

“In support of the ‘#StopHateforProfit’ initiative, Eddie Bauer will suspend all paid ads on Facebook and Instagram through the end of July, effective immediately,” the clothing store chain said in a tweet. (https://bit.ly/2Yso440)

‘We will join #StopHate4Profit and stop posting on Facebook for the month of July,’ the advertising agency said.

The film distributor and studio became the first Hollywood company to join the movement. The company said in a tweet it would stop advertising on Facebook and Instagram, starting immediately, through at least the end of July.

‘We will pull all ads on Facebook and Instagram, effective immediately, through at least the end of July, pending meaningful action from the social media giant,’ the outdoor apparel brand said.

‘Viber will remove all Facebook-related contact points from our app including Facebook Connect, Facebook SDK, and GIPHY, as well as cease all ad spending on Facebook,’ Djamel Agaoua, chief executive officer of the messaging app company, said in a statement on Twitter.

‘For 82 years, we have put people over profits. We’re pulling all Facebook/Instagram advertising for the month of July,’ REI tweeted.

You may have missed